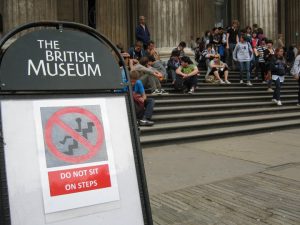 “General Public,” sitting on the steps of the British Museum

Exhibit designers make all kinds of decisions to help visitors navigate through curators’ and educators’ plans for their learning. Linear narrative? Limit directional choices by making spaces narrower! Need to impress with a monumental message? Open up that gallery so visitors can see it all at once! Need visitors to go right? Put in a curved wall for them to flow by like water! There seems to be no end to design options for nudging visitors in the direction we want them to go.

The problem with all of them is that dyspeptic yet high-ranking old soldier General Public, the fickle, powerful fellow whom museum professionals study, love, and complain about. No matter when that beautiful, expensive, well-lit curved stopwall tells him to go right, he’s got other ideas. Maybe he’ll go right, maybe he’ll go left. When General Public comes up among museum professionals, it’s usually because he’s done something we don’t like (e.g. fail to read our long labels, sit on the floor in a gallery with no seats, or get fingerprints all over our clean plexi…geez-louise General Public, do you have to eat ice cream before pointing at objects?!).

In our field today, we know there is no one public, some mass of humanity that can be used as a catch-all for all museum users, and yet this fiction of General Public persists. Sometimes people do have behaviors in common that tempt us to treat them as a mass, but conceiving of museum users as an undifferentiated mass will lead us to ignore the very richness, the complexity, and diversity they bring to public institutions. If we let General Public stand in for all visitors, we miss opportunities to communicate effectively with people of differing abilities, experiences, concerns, and motivations for learning.

At The British Museum, I took a photo of visitors sitting all over the steps behind a sign that clearly says “Hey! No sitting on the steps, dumbass!” (Translated to American English by me.) I submit that the least productive response that professionals can make to such a seating situation is to bemoan the bad behavior of General Public and walk away grumping, wishing we had gone into a more lucrative field that didn’t involve so many…people. Maybe a better solution is to find a way to provide seating in a place that won’t be a problem if a fire alarm sounds. Lots of people, but not all of them, need a bit of a rest after a museum visit. Give these folks a place to rest their bums (American English translation: give them a place to park their asses).

So let’s just salute General Public one last time and let him retire to some rest. He’s just seen too much battle.