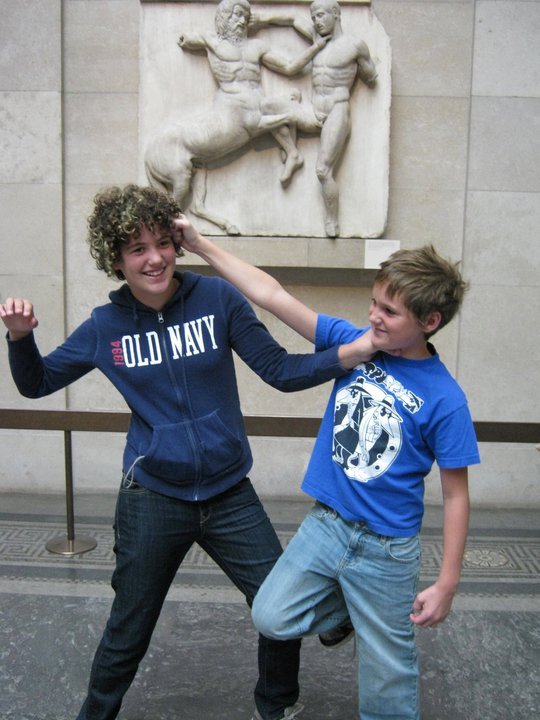 Part of the south metope of the Parthenon at the British Museum shows a Cenataur and a Lapith in hand-to-hand combat. So the story goes that the Cenataurs got drunk on wine (not judging…not judging at all…) and made off with some Lapith women, which most certainly upset the Lapith menfolk and so they had to throw down on these men with horse hind ends. The art rather unsurprisingly leaves out the story of the women, and that, along with the very presence of these Greek treasures in the British Museum, are topics for another time.

About halfway through our visit to the British Museum, we wandered into the noisy wing that houses these heavy pieces Mr. Elgin could not resist. At first we spent time looking and talking, like any “normal” family, but then my attention turned (as it is wont to do) to visitor behavior. As I busied myself videotaping people looking at old things, my 12-year-old and 10-year-old remembered how I taught them to look at art and sculpture with their bodies and not just their eyes. They went from scene to scene, acting out what they saw, which meant vigorous hair pulls, the occasional groin kick, various chokeholds and much exaggerated straining of pecs and abs. Soon visitors found these uninhibited American kids to be pretty interesting, which increased their commitment to their roles.

Probably someday, if they see them again, they will reconsider the stones in terms of issues like the lack of attention to the women’s story, the troubling conditions of their departure from Greece, or some other  grand question that occurs to their generation. At 12 and 10, though, the opportunity to act out a terrible scrap was just grand fun.